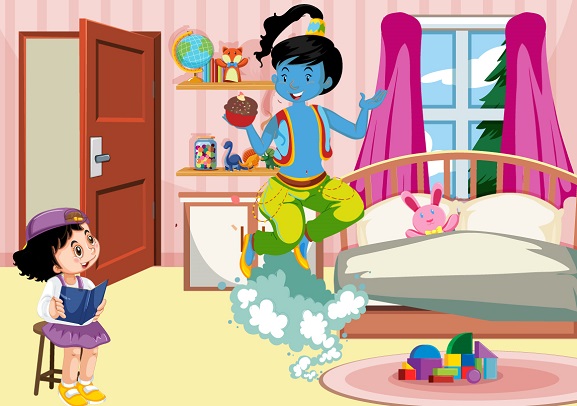 Once upon a time, there lived a little girl named Waresha. She had short, black hair and a lovely smile. Reading books and playing were her favourite activities. Waresha also loved to have ice cream. In fact, she loved ice cream so much that she could have it any time of the day. Strawberry ice cream was her favourite.

One sunny Sunday afternoon, Waresha was reading a fairy tale. It was about three little pigs who tricked a big, bad wolf who wanted to eat them. She was feeling sleepy and about to doze off when suddenly there was a big bang. Startled, Waresha looked up and lo behold! There was a big blue man with a bald head. “Who are you?” she said, frightened. “And from where have you come?” The blue man laughed merrily. “I am a genie!” he said. “I come to all those who have been good throughout the year. You have been a good girl. So, I have come to you.” Waresha was elated.

“I can read your mind, little girl,” said the genie. “I know what you like and dislike. You are very fond of ice cream, isn’t it?” Waresha nodded excitedly. “Yes! I love strawberry ice cream.”

The genie smiled, “I know. And because you have been a good child who behaved well, did her homework on time and was friendly with others, I will give you a gift.” He clapped his hands thrice and there appeared a big bowl of strawberry ice cream! “This is for you,” he said and handed the bowl to Waresha. “Thank you, genie!” gushed the little girl.

“But remember one thing! This is a magical bowl,” the genie boomed.

“Magical? How does the magic work?” wondered Waresha, but before she could ask the genie, he had disappeared.

“Well,” she thought, “Never mind how the magic works. Let me have some ice cream first.”

So, Waresha began eating the delicious strawberry ice cream. It had small pistachios and tasted wonderful. Soon, half of the bowl was empty. By now, it was evening. Waresha stepped out of her home with the ice cream bowl in hand.

Down the bend of the road, she saw a poor old woman sitting with an empty plate in front of her. I’m so hungry,” she said, and looked sad and forlorn. Waresha decided to help her. She gave the remaining chocolate ice cream to the woman, putting it on her plate. The woman blessed her as Waresha continued walking down the road with the bowl in her hand.

Feeling pleasantly surprised, Waresha continued her journey and soon entered a park. She sat on the swing to enjoy herself. But as she was swinging herself, there came a little puppy. It hovered around the swing, whining. The puppy seemed lost.

Once again, Waresha decided to do whatever was in her power to help. “Maybe if I give the puppy ice cream, it will cheer him up,” she thought. And so, she gave the puppy all of the strawberry ice cream that was in the bowl. Wagging its tail, the puppy started licking the ice cream. As tit was doing so, a big dog appeared and joined in. The puppy licked the older dog, which was its mother.

Now, Waresha began to make her way back home. She looked for a dustbin to throw the empty bowl, but again, just as she was about to dispose it, she found the bowl to be full! She was as surprised as she was happy.

Slowly, Waresha realized the magic that was inside the bowl. The genie had said that it was a magical bowl. But the magic was very special. When she ate the ice cream herself, the bowl did not automatically fill up. However, when she shared the ice cream with others, the bowl turned out to be full again! She understood that it was by being kind to others that the bowl would always be full.

Waresha inwardly thanked the genie for giving her such a beautiful magical ice cream bowl that would always encourage her to be loving towards others. “This delicious strawberry ice cream is not just for me, but for everyone,” she said and smiled. “And I will take great joy in sharing it with others.”