The Girl Who Loved to Dance

There was once a little girl named Madhuja. She was a sweet, kind girl with a beautiful smile. If there was one thing in the world that she loved the most, it was dancing. Yes, Madhuja enjoyed swaying her hands and legs to the beat of music. Also, when she was happy she would spring a step and break into a dance. During happy moments, she would often dance in the balcony of her home.

Whenever Madhuja had free time, she would look up dance videos on the Internet and practise the various steps. Her parents encouraged her and appreciated her love for dance.

Now, one day Madhuja came across a billboard advertisement announcing a big dance competition. It was to take place in her city itself and the grand prize was a huge sum of money. Madhuja was very excited.

She entered her name for the competition and began to practise hard. Every evening, after completing her studies, she spent a couple of hours mastering the steps of a peppy song. She was to dance to its tune at the competition.

When the competition was just a few days away, a strange incident took place. Madhuja was returning from school one late afternoon. The road was mostly deserted when she spotted a small, white rabbit whining in pain, along the side of the road. On approaching closer, she saw that there was a thorn stuck in the rabbit’s paw. The animal was lying sideways with the thorn pitifully stuck underneath its foot.

Madhuja was moved at the sight and knelt down to help the rabbit. She held the injured paw firmly and then pulled out the thorn with a thrust. The animal yelped and then let out a relieved groan. And then immediately, the rabbit disappeared and in its place stood a beautiful woman in a shimmering white dress. Madhuja gasped.

“I am the Queen of Fairies,” said the woman. She had a diamond crown on her head and in her hand, she held a magic wand. “I had turned into a rabbit but then while scampering about, stepped on a thorn which got stuck to my foot. Thank you for helping me and relieving me from the pain. As a reward, I would like to give you something. So, tell me – what would you like to have?”

Madhuja was speechless and spellbound. She had never met a fairy before, let alone speak to one!

“Well,” she spoke slowly, mustering courage. “I would like to win a dance competition that’s coming up.” And she told the Queen Fairy all about her love for dance and how ardently she wanted to win the competition. The fairy smiled and then tapped her wand twice on the ground. And lo behold, there appeared a pair of beautiful blue shoes, with a satin bow on each of them.

Madhuja was beside herself in amazement. “These shoes are special,” said the Queen Fairy. “If you put them on, they will make you dance most attractively and beautifully. Everybody’s eyes will be on you. They will definitely make you win the competition.” Hearing this, the little girl was elated.

“However,” said the fairy, “If it ever happens that you do not want these shoes anymore, clap thrice and they will disappear.”

These words made Madhuja feel confused. “Why would I not want these shoes?” she said. But the Queen Fairy simply smiled and waved at her. Then she disappeared, and Madhuja was left staring into space. The blue shoes, however, were still there. Madhuja picked them up and went home.

She did not tell anyone about the shoes. That evening, while practising her dance she wore them to see if they made any difference. Wonder of wonders! She found herself making the movements of an expert dancer. She didn’t have to make any effort at all! The shoes were doing all the work. Madhuja was fascinated. The next few days, she practised with the shoes on.

Finally, the day of the competition arrived. There were little girls and boys from far and wide who had come to participate. The audience was a large one.

Some rocked to the tune of hip hop, some to rock music while others did classical dance. However, Madhuja stole the show with her dancing shoes. She performed with style and grace, and received a thundering applause from the crowd. The judges were highly impressed. At the prize-giving ceremony, Madhuja received the first prize – a whopping fifty thousand rupees and a golden cup! She was very happy and her parents were proud.

That was just the beginning. Soon, there were other dance competitions in which Madhuja participated. However, instead of practising like earlier, she did not bother. She would only wear the blue shoes on the day of the competition and enamoured everyone. As time rolled on, she became more laidback and lazy.

She would no longer dance with her friends, on her own in the balcony or put small performances in front of her uncles and aunts as she did earlier. Her parents rued the change but did not know why this had happened.

Soon, Madhuja lost her interest in dance. She no longer experienced the former passion and zest for it. She was surprised at this.

“I need to ask the fairy why I feel this way,” she thought. “I want to get back my love for dance, not just win competitions and praise.”

The next day, she went to the spot where she had found the rabbit and looked all around. But there was no fairy to be seen.

“Are you looking for someone?”

Taken aback, Madhuja turned in the direction of the voice. It was a parrot up on the tree.

“I’m actually looking for the Queen Fairy,” she replied. “I need to ask her an important question.

“Oh!” squeaked the parrot, and it flew down. In the twinkling of an eye, there appeared the Queen Fairy in her usual shimmering white dress.

“What is it, my little girl? Why do you look upset?”

Madhuja told her about the problem she was facing and lamented her lack of interest in dance.

The fairy laughed gently. “The problem lies in those magic shoes,” she said.

“Well, it is because of those shoes that you have stopped practising dance. Earlier, you would enjoy dancing and engage in it to feel happy and content. Even when you entered that first competition, you used to practise to become better. However, once you got the taste of success you began to increasingly rely on those shoes. You gave up dancing on your own, without the shoes. And over time, this has made you lose your love for dance in the first place. The shoes have made your life easier, but this in turn has robbed you of your zeal to put in effort.”

Madhuja pondered over the words. The fairy was right.

“What can I do now?” she said. “I want to get back my earlier self, with my passion for dance.”

“The answer is simple. You have to get rid of those shoes. But remember, once they are gone you cannot have them back. And without these shoes, you may not be the best dancer every time you perform. Think about it!”

“Well, I have to go now. Goodbye!” The Queen Fairy’s voice trailed off as she disappeared once again into thin air.

The little girl went home and thought hard on what the fairy said. Finally, she made her decision. Taking the beautiful blue shoes out of the box where she kept them, Madhuja clapped three times. There was a bright flash and the shoes vanished! The girl smiled. She was willing to forego the fame of easily being the best dancer. Yes, she would be a brilliant dancer but that would be by dint of her own effort. She wanted to dance simply for the joy of it, without relying on anything or anyone.

That night, Madhuja slept peacefully. She could already feel her enthusiasm for dance returning. “I’m going to begin my dance practice tomorrow,” she resolved. “And this time, it’s going to be barefoot!” And a smile spread across her face as she snuggled in bed. 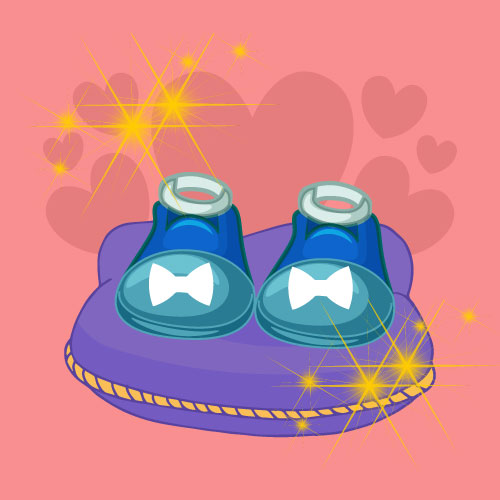