The Brave Girl from Daffdale

This is the story of a lovely little girl named Aria. Living in the bustling town of Daffdale, she loved dance, music and playing with her friends. Aria also liked to listen to stories from her grandparents when they visited her. She lived with her parents in a beautiful red cottage.

Now, among all the foods that Aria liked, her favourite was chocolates. She loved chocolate truffle cakes, chocolate biscuits, chocolate muffins, chocolate cookies, chocolate ice cream, chocolate shakes and the list could go on and on! Aria could simply devour chocolates at any time of the day.

One bright sunny March evening, when the sparrows were out chirping Aria decided to go for a walk. “It would be lovely to have a chocolate while I’m out,” she thought and tucked a bar of milk chocolate in her pocket. She entered the park and was strolling around when she suddenly came across a dreadful sight. A small boy was being bullied by two other older boys. The little boy was close to tears as the other boys laughed at him. “Go, look at yourself in the mirror!” they cried, “You are so thin and scrawny that you can never win a fight. Pooh!”

Aria felt angry when she heard that, and stepped forth in the scene. “Hey!” she said, “Please don’t treat him like that. Just because you are older and bigger, you have no right to make fun of him. Leave him alone.”

One of the boys turned sharply. “Look here, girl, don’t try to meddle in our matter. We have not requested your advice anyway,” he barked.

The other boy laughed hoarsely. “Stay away if you don’t want to be part of the trouble!”

Aria looked at the little boy. He was cowering in fear, a picture of despair. She felt terrible for him.

However, Aria knew that the older boys were more powerful her. If she were to argue with them, they could end up hurting both her and the boy. So, she decided to get help from elsewhere.

Backing away, she started walking fast to fetch an older person who would be able to stop the bullying. She could hear the older boys laughing in the distance.

Suddenly, she heard a small voice. “Stop! Where are you going?”

Startled, Aria looked around but there was no one to be seen.

“I’m down here,” came the voice again and Aria spotted two frogs on the grass. However, unlike other frogs they had tiny crowns on their heads! Aria stared in astonishment.

“Let me pass please,” she said, “I want to get help to rescue the little boy over there.”

“I know, I know,” said the frog that was slightly bigger than the other. “I am the Frog King and this is my Queen.” He pointed towards the frog sitting next to it.

“I saw what happened over there and how you wanted to help the little boy. It’s great you want to do something about it. However, you don’t have to go far.”

Saying this, the frog hopped over to a shrub. Next to it was a large pumpkin.

“You can take this pumpkin. It is magical and will help you save the boy,” he croaked. “However, you can have it only if you give me and my queen the chocolate that’s sticking out of your pocket.”

Now, Aria had really looked forward to having that chocolate in the park. But the little boy was in trouble and so, she lost no time in handing over her chocolate to the Frog King. At this act, both the Frog King and Queen croaked in joy.

“Now, go ahead and carry this pumpkin over to those boys,” said the Frog King, “And it will work its wonder. But remember to take the pumpkin home, or I will be very disappointed.”

Aria felt confused at these words. Why did the frog want her to take the pumpkin home? However, precious moments were slipping by and she wanted to help the little boy as soon as possible. So, without asking any further questions she dragged the pumpkin along to where the bullying was taking place.

When the two older boys saw Aria with the pumpkin, they laughed raucously. She put the pumpkin at one spot and waited for the magic to work. Soon, the pumpkin started spinning wildly. Then it moved rapidly towards the older boys. They jumped and shrieked, scared out of their wits and finally ran away as fast as their legs could carry them. Now, it was Aria’s turn to laugh. The little boy was smiling too, in amusement. She approached and patted him on the shoulder. “It’s alright,” she said. “Now, go home before it grows dark.” He nodded. “Thank you so much!”

Aria then remembered the frog king’s words. He had instructed her to take the pumpkin home and so, she dragged it along to the cottage. Her parents were surprised to see such a large pumpkin. Aria then told them the whole story. Her mother petted her affectionately for her kindness while her father praised her bravery in saving the boy.

“Now, let’s slice the pumpkin,” said her mother. “I will make pumpkin pie for dinner.”

She fetched a strong, sharp knife and began cutting the pumpkin. But after the first slice was cut and parted, lo behold, from within the pumpkin spilled chocolates of various sizes! Some were shaped like diamonds and spheres while others were like moons and stars. Aria cried in delight, clapping her hands. Her parents stared in disbelief.

And then there was a croak by the window. They all turned to see the frog king seated on the window sill.

“This was a surprise and reward for you, Aria!” he said. “I hope you liked it.”

“Yes, of course. Thank you! But how did you know that I like chocolates?”

The frog laughed. “I am the King of Frogs and I have my own share of magical powers. You see, I knew you loved chocolates. That is why I asked you to give me your chocolate earlier in exchange for the pumpkin, which could save the boy. I wanted to see how willing you were to let go of your own happiness to help someone else. And you, my dear one, readily handed over your chocolate, even though you would have loved to have it yourself. So, I decided to put all kinds of chocolates in the pumpkin using my magic, as a token of my reward for you.” 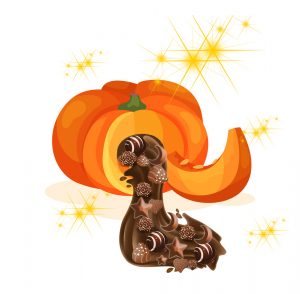 Aria smiled and thanked him again for his thoughtfulness and generosity. Then, she ran out to invite her neighbourhood friends. As there were plenty of chocolates, she wanted to share the lot with them. And soon, the cottage was abuzz with chatter and laughter. Aria and her friends settled down with the chocolates and discussed details of the incident which had taken place that day.

Magic, indeed, is found in the unlikeliest of places and makes its way to those who are kind and brave – like Aria.